Is it a star? Is it chorizo? Or is it an astronomy prank gone wrong?

After posting a photo he claimed was a brand new image of NASA’s James Webb Space Telescope but was just a sample of chorizo, a well-known French physicist had to issue a public apology on Twitter.

(Photo: Etienne Klein/Twitter)
This photo features a slice of chorizo, which French physicist Etienne Klein claimed was a brand new image captured by NASA’s James Webb Space Telescope. He later revealed it was just a “prank” and warned people to beware of what they initially saw.

A joke of scientists

The image was shared on Twitter on July 31 by Etienne Klein, director of research at the Alternative Energies and Atomic Energy Commission. He tweeted that chorizo ​​is Next to Centaur – a small low-mass star located almost close to the Sun.

After causing confusion and debate among Twitter users, Klein finally apologized for the joke and explained that his goal was not to surprise anyone but to remind others to always be skeptical. and not believe what they had initially seen.

The physicist clarified that it was his own way of having fun and called the prank a “scientist joke”.

“Photo of Proxima Centauri, the closest star to the Sun, located 4.2 light years away from us. It was taken by the JWST. This level of detail… A new world is being revealed day by day” , Klein wrote in his prank tweet.

Although several Twitter users followed the prank and made it an instant meme, some people didn’t take the tweet lightly, especially coming from a scientific authority like Klein.

An user argued“Coming from a scientific research director, it’s quite inappropriate to share this kind of thing without specifying from the first tweet that it’s false information when you know the speed at which false information passes.”

However, an user came to Klein’s defense saying that politicians were doing “exactly the same thing”.

“Yet our politicians are doing exactly the same thing except that it negatively impacts the lives of 67 million people, but hey, it’s better to be offended by a schoolboy joke than to react to the government’s jokes, isn’t it? this not,” argued the user.

Klein then shared a different image of the James Webb Space Telescope, saying it was “REAL this time”, following his apology.

The image he shared featured the beautiful but chaotic cartwheel galaxy that James Webb recently published. 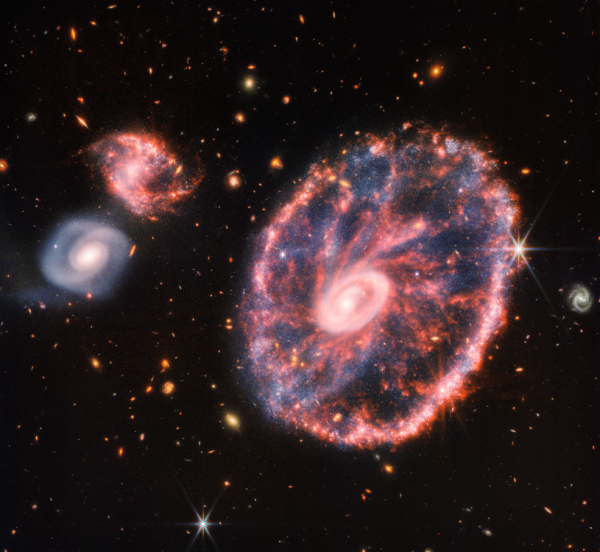 Against the backdrop of many galaxies, Webb’s powerful infrared finder captured this perfectly detailed image of the cartwheel and two smaller companion galaxies.

It should be noted that the image features a dramatic stellar event as a huge pink-spotted galaxy is about to collide at high speed with two smaller galaxies, according to NASA.

Related article: “New era in astronomy:” The stunning new images from NASA’s James Webb Space Telescope and the stories behind them

This article belongs to Tech Times

ⓒ 2022 TECHTIMES.com All rights reserved. Do not reproduce without permission.